What’s still going strong? The two big aluminium ice cream containers with the bargain Aldi plants certainly are, having flowered continuously for nearly 4 months and with only an occasional dead heading of the petunias – these have far and away been the best of the summer pots this year, although there is still a tolerable amount of colour in some of the others.

Elsewhere around the garden are isolated spots of colour against the green which has taken on a new freshness since the cooler and damper weather there has been of late. Most of the colour, seemingly inevitably, is in the hot borders, the hotter colours tending to come into their own in late summer. Clockwise from top left are Geum ‘Mrs Bradshaw’ against Rudbeckia fulgida, Tagetes ‘Paprika’ and Imperata cylindrica ‘Red Baron’, heliomeris and thunbergia. The heliomeris is a trial for Which? Gardening, and although I have tried several times growing thunbergia from seed I have only ever produced one plant – this is not it though, although these orange ones are my favourite and were a late reject from the local garden centre. 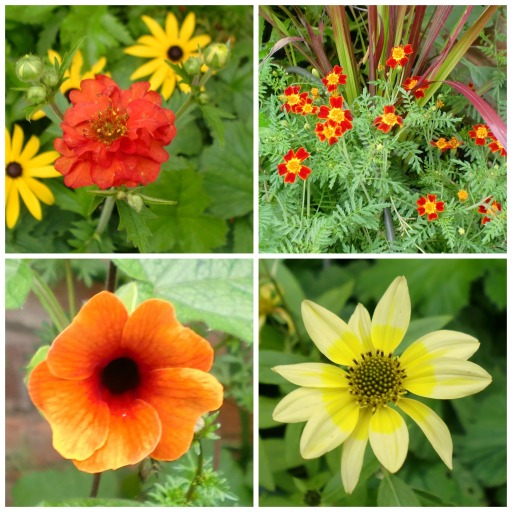 On the white spectrum, in the hedge border near the house Hydrangea arborescens ‘Annabelle’ has been brilliant this year, really repaying the effort of getting rid of the D****’s P***** to make space for the new border; I have moved a clump of white Japanese anemones to the same border but they have not re-established yet and it is the parent clump that is showing off at the side of the woodland edge border:

There are a few pinks around still, the odd geranium and penstemon, this nicely establishing clump of phlox (with minute evidence of colour on the adjacent aster) and the unassuming but reliable spikes of pink on this very ordinary persicaria in the woodland edge border:

These aren’t the only flowers in my garden today, but along with the Cyclamen hederifolium I have written about recently and shown again below they are perhaps the ones giving me greatest pleasure at the moment, although I have forgotten to photo two late flowers on Clematis ‘Buckland Beauty’ which should really have been included, along with the ‘Pink Perpetué’ roses by the front door. If you click on the link to Carol’s blog at May Dreams Gardens you will find links to other garden bloggers’ blogs where you can see what is blooming today in their gardens – thanks to Carol for making this possible.