Wow! That collage might fool you into thinking the garden is full of roses at the moment, but it’s an illusion – although many are having a second flush or have continued flowering off and on throughout, which is of course delightful. With no apologies for their pinkness here we have, clockwise from top left:
* climber ‘Danse du Feu’ on the pergola by the paved area
* rambler ‘Rural England’ on the pergola at the side of the sitooterie
* climber Zéphirine Drouhin’ in the rose garden
* unknown rambler in the hedge
* unknown ‘patio rose’ (?) in the right hand hot border
* climber ‘Pink Perpetué’ outside the front door

That lovely deep pink rambler in the hedge reappears at different times each year but as the flowers are about 10ft above ground level it is easy to miss them and the hedge is so thick here it is impossible to see where the plant begins – I am sure it would be happier if it could get more light, although there is little chance of improving the soil in the middle of the

200+ year old hedge. I feel a mission coming on – voyage to the middle of the hedge – to rescue it and give it some TLC. Thankful for some of the aforementioned TLC was, I guess, climbing rose ‘Cécile Brunner’ which lingered in a pot in the shade until I moved the pot to a different position earlier this year and cut the bottom off it – Cécile has thanked me by producing her first flower ever, but unfortunately I missed it until now. Always next year though!

Whilst tomatoes and chutney were still in my head I scraped together enough tomatoes from the various different plants and made my first batch of chutney (recipe here) for this year. Instead of cobbling together a pickling spice mix I bought a branded mix this year which has given the chutney a rather spicier taste than usual and found chillies in the list of ingredients. Hmm, not so sure ….. but perhaps I could pick the dried chillies out before the next batch …

Since dealing with the Rector over the weekend I have been able to appreciate all the more the delicate beauty of Clematis jouiniana ‘Praecox’ which not only swarms up a pillar but clambers over the horizontal supports of the arbour, although all the more easily for not having to battle with the Rector for supremacy and doesn’t she look amazing against the now open canopy? 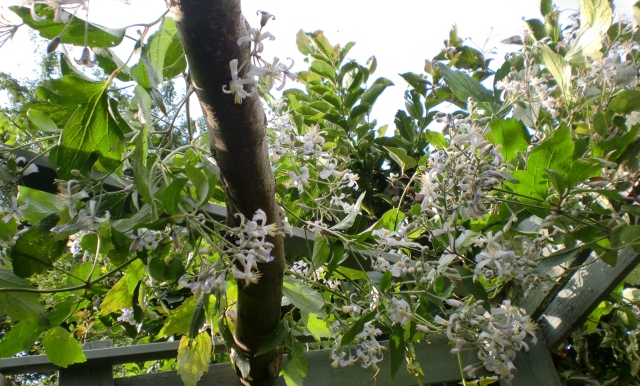 Like Loading...
This entry was posted in Gardening and tagged Clematis jouiniana Praecox, roses, tomato chutney. Bookmark the permalink.

12 Responses to A Bit Flushed