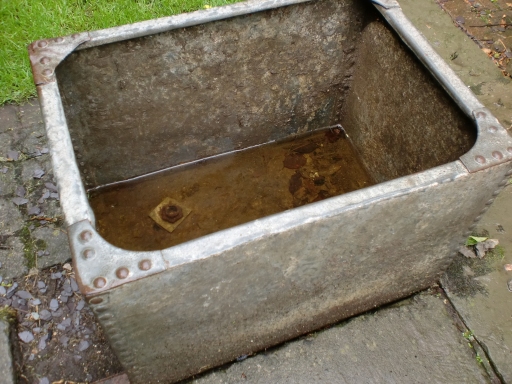 I had just come back to the house after a lingering ramble late morning today, monitoring progress, looking for new emergences, checking labels and assessing the progress of the stream (still losing some water…grrr), having decided I had time to pick raspberries and loganberries before lunch. Some of the raspberry canes are virtually exhausted of fruit now, and I was looking forward to cutting these back to allow more space for the canes that will fruit in autumn, whereas some of the loganberries are probably past their best now. I was just letting the Golfer know that I was disappearing to the bottom of the garden so he didn’t worry about where I had gone, when I looked up and saw rain bouncing off surfaces outside – and my! how it rained!! The thunder rumbled across for 3 or 4 hours* with almost continual torrential rain, adding another 15mm to the 40mm we had during Saturday evening and night.

It put paid to any outdoor jobs although the Golfer did venture to the shed to cut some timber and I, after trialling ‘something’ for my back-of-shed project, then had to assess it in situ by which time the rain had eased off a little. meanwhile, it has been interesting to watch the water level in the galvanised tank (shown above) increasing in the last few days, despite there still being a drainage hole in the bottom; although I have decided that I will use this as a planted water feature it is nevertheless not worth the risk of leaving it  un-bunged!

Making the most of the rain-enforced sit-in I have also been able to de-stone another batch of cherries the Golfer had brought back from the golf course – it must be a particularly good year for cherries as several people have talked of picking them wild. Both red and black cherries were particularly juicy, but I had learned from the experience of Friday’s picking and de-stoning that the juice of the black ones also stains. Despite wearing latex gloves on Friday my fingers were purple afterwards, with the juice staining all round the finger nails too as well as in random spots across the kitchen table. Having learned that lesson, I wore TWO pairs of latex gloves today and devised a screen to restrict the extent of juice spurting – with some success, fortunately.

* five hours after the thunder first started it is rumbling over us again…..

Like Loading...
This entry was posted in Gardens, In the kitchen, projects, Weather and tagged cherries, thunder. Bookmark the permalink.