It’s hard to believe that May begins tomorrow, and although I have recently read that spring is generally believed to be about 20 days behind the norm in the UK I think there will be a huge variation across and within the regions. Our solar panels have registered that April has almost equalled July in becoming the sunniest month since May 2012, and our almost non-existent rainfall supports that unofficial statistic. Some growth and flowering in the garden is indeed a little later, I am sure (beneficial for plum and damson blossom), but the overall impression is that the garden is doing its very best to catch up and make up for lost time. To place where the photographs in this post are taken, follow this link to see a plan of the garden.

The paved area is now framed with the unnamed magnolia, and Viburnum x bodnantense ‘Dawn’ in the biggest of the square pots. The tulips in the large round pot are now in bud, disguising the legs of Rosa ‘Munstead Wood’, whilst the Tulip ‘Peach Blossom’ are progressing well in the pots in the foreground, although the ‘pink’ wallflowers are not. 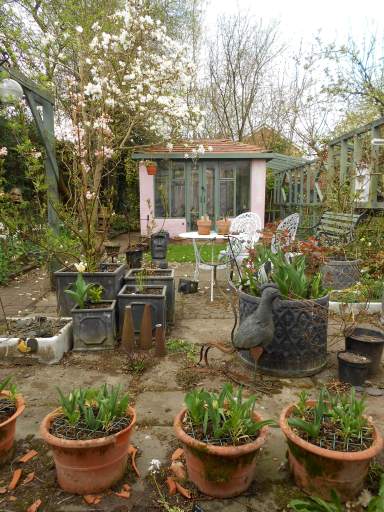 To the right, the Tête-à-Tête are now past their best and need daily deadheading, and the turf laid last year here is growing quickly to form a thick carpet around them and will have a long wait before it can be cut! In the background the white flowers are on a relatively young damson, whereas the apple trees in front of it will not flower for a few weeks yet. 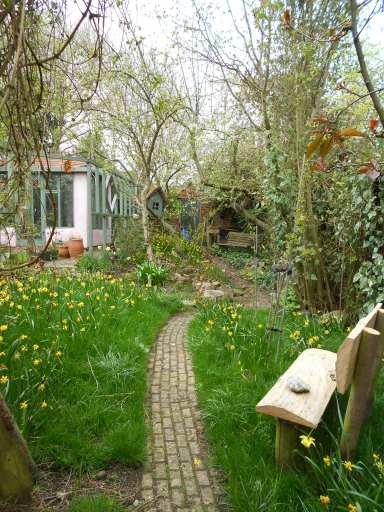 The woodland is resplendent in its swathe of wood anemones (camouflaging the primroses) and this month’s big surprise of flowers on the two rhododendrons. The bluebells and wild garlic are in bud but not sufficiently so to show any colour in the picture, unlike some of the trees which are leafing up nicely. 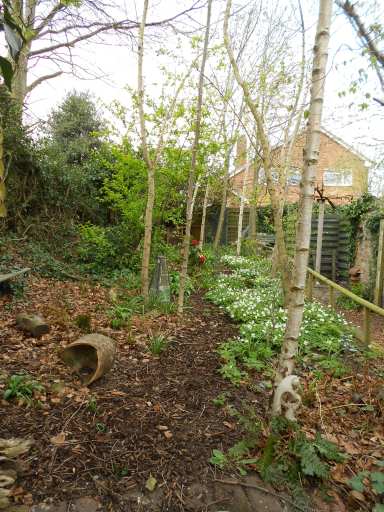 The main herbaceous border is looking greener as stalwarts like geranium and astrantia bulk up for this year’s performance, accompanied by species tulips and a range of allim bulbs. 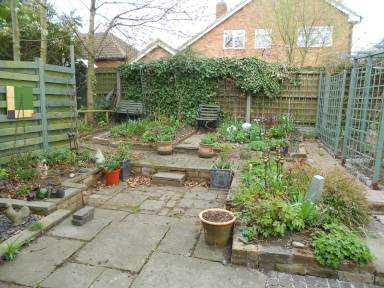 Next to it the clematis colonnade with its underplanting of geranium is livening up, but  already indicating where clematis that did not survive their move need to be replaced. 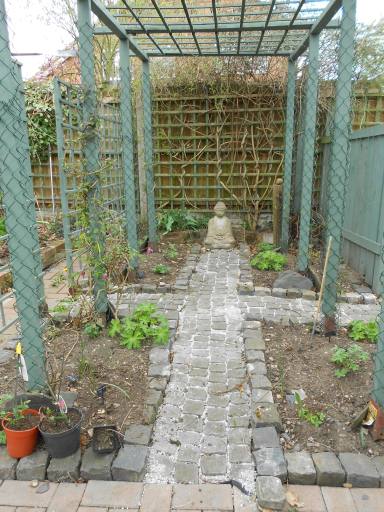 The woodland edge border needs no more introduction, having been featured so many times already this year with its endless delights. 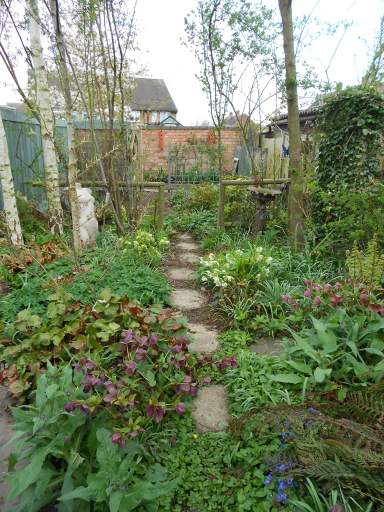 Through this border to the wall that separates this part of the garden from the fruit and veg area, the left and right hot borders are in-waiting for a floriferous summer, the left side more satisfactorily so although the right side is to be augmented with dahlias this year. 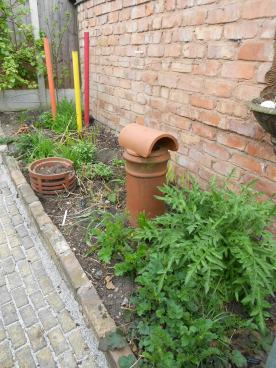 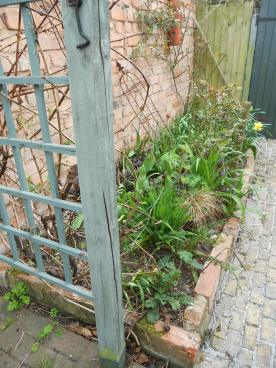 Through the gate, the greenhouse is fuller than it has ever been, the fruit bushes in the fruit cage are in leaf (with redcurrant flowers dangling in any breeze) and there are some healthy (so far) peas and broad beans under netting cloches to deter the perishing pigeons. 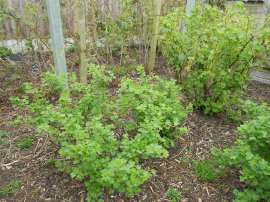 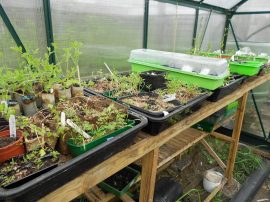 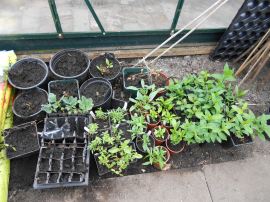 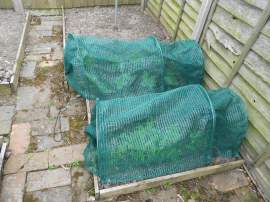 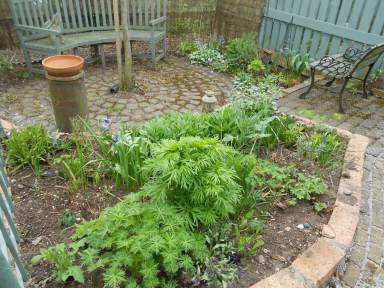 There is no colour other than green in the rose garden and definitely no buds here yet, but at least the roses are all growing steadily and casting off some of the earlier frost damage to the premature new leaves. New rose leaves are just so beautiful, aren’t they? 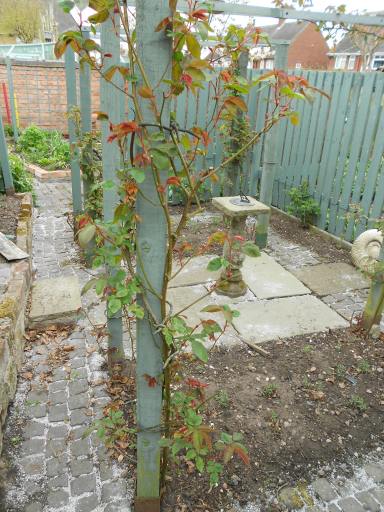 Back towards the house, the species snowdrop border is looking more balanced since the sarcococca and hydrangea were moved to their new home, and will hopefully benefit from new summer companions as the year progresses, as well as from increased light following last year’s work on the hedge. 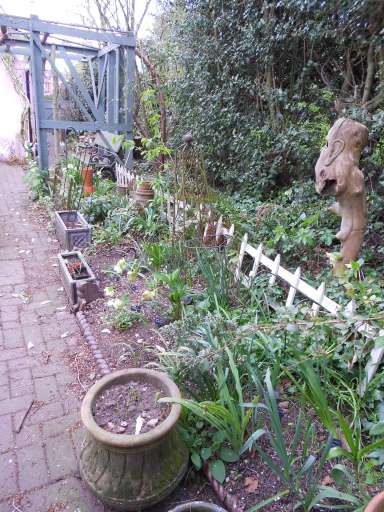 Finally, for this end of month view hosted by Helen the Patient Gardener (and do visit Helen’s blog to see her EOMV and to access links to many others), is another shot of the bed I have been working on in the last couple of weeks, already settling down and looking not quite as new it did at first. I know I have spent time and money recreating my revamped garden over the last year or so, but I am now really beginning to feel that my efforts are going to pay off so please excuse any over-exuberance in my posts! 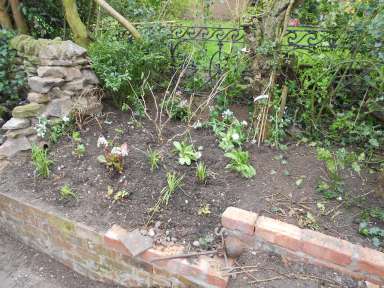 18 Responses to End of Month View: Catch Up Time