After taking advantage of a relatively warm and definitely sunny afternoon (whoohoo!) to sit briefly on the renovated bench near the stream after lunch I decided to tackle the scrubby area I mentioned in a post a few day ago, figuring that if I dug the scrubby vegetation out I could then contemplate the cleared space and perhaps trigger the necessary inspiration. Little did I know that I was tackling the Devil’s Plant……. It suckers, it roots, it climbs – it sends its devious shoots out to all four corners of the earth – and it soon became personal! I had begun to dig out the numerous rooted plants in the area of the photograph but quickly hatched a plan to annihilate all the Devil’s influence from that bed, prompted in part by an unexpected job which had arisen.

While I was digging and cursing (D****’* P****!), the Golfer had been removing the pump from the trough to the left of this area, where ‘Harry’, Arum marmoratum and the recently replanted primroses are, outside the kitchen window, as the pump was blocked. He felt the tank the pump is in needed to be strengthened which will mean dismantling all my carefully placed rocks – so why not clear the Devil’s Plant right up to this feature and devise a scheme for the whole area? My initial concern had been exposing the edge of the wall I had built behind the trough, as it was only a section of wall, the edge disguised on one side by the D****’* P****, but a scheme for the whole area could include a continuation of the wall or at least a proper stopping up of the edge. 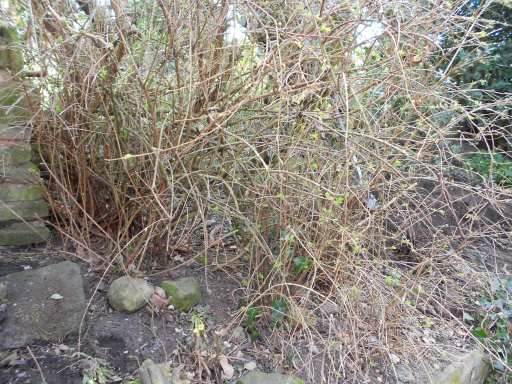 The challenge was now to remove every accessible scrap of D****’* P**** and I roped in the Golfer to remove the biggest and toughest of the roots, leaving us with a clear area perhaps about 5 feet by 10 feet. The soil isn’t as dry and  poor as I expected, perhaps having been undisturbed and nourished by  a couple of hundred years of leaf fall from the hedge and rotting holly and hawthorn trunks. My initial thoughts as I dug, apart from the D****’* P**** expletives, were to plant some acceptable shrubs to fill the gaps in the hedge to obviate our neighbour’s need to plug them with his assorted rubbish, still leaving me with space to play with in front of them – but at least the Devil’s Plant is gone! Hurrah!

Like Loading...
This entry was posted in garden structure, Gardening, Gardens and tagged snowberry, Symphoricarpos. Bookmark the permalink.

18 Responses to The Devil’s Plant