Having been led up the garden path to her woodland by Pauline in her blog this morning, I was in my element viewing the lovely photographs she has posted today. Beautiful shots of snowdrops, hellebores, crocus, witch hazel, camellias and other early spring flowers – what more could a garden lover want (well, this garden lover, as I can’t assume everyone loves this kind of garden!)? I suppose they might want the same in their garden, and for Pauline this was one of the main attractions to the property in the first place, although she has added greatly to it. We didn’t start off with a woodland or woodland edge border but thinking creatively has produced both from a blank canvas and each year these areas of the garden give me greater pleasure than any other parts of the garden – the plants they support are somehow so unpretentious, so unfussy, so accommodating and in such gentle colours, arriving at a time that reminds us that spring is on the way after the barren brown of winter – well, it just brings such pleasure, pure and simple.

The woodland is preparing itself for its real contribution in a month or so, and the woodland edge borders are not yet at their early peak as the single Galanthus nivalis are still resolutely remaining tight-lipped, although their contribution is still very much in evidence, along with many hellebores and, in the picture below, Hamamelis ‘Arnold Promise’. Forming the green backdrop are several  Geranium phaeum, persicaria, epimedium, some big clumps of pulmonaria, a number of young rhododendron, and numerous ferns. The picture above shows an extension to the borders that was only created last year after the rose garden was moved, but was given instant credibility by the relocation of ferns from other parts of the garden. It has been treated to two new hellebores since then, including the double yellow bought last week. I have got into the habit of dividing the snowdrops every year, digging out the edge of clumps and replanting them – and must confess to doing so already this year, despite them not fully flowering yet. There are so many different ideas about when to split them, but I have every confidence that these won’t suffer (and it’ll teach them not to be so late opening their buds next year!). 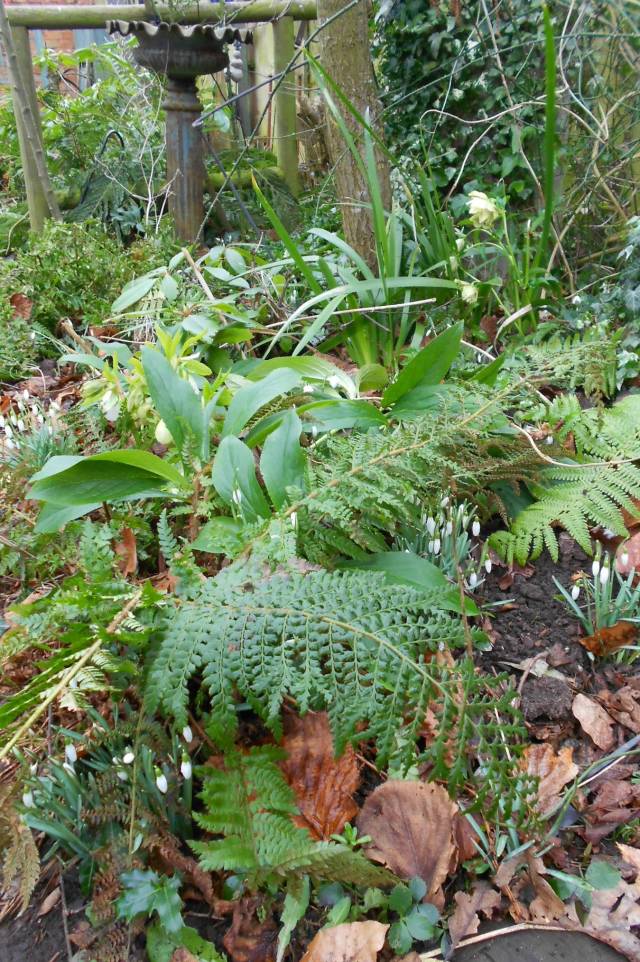