It was a real joy to be in the garden yesterday, photographing hellebores and snowdrops, witch hazels and primroses, for the purposes of this blog. The mild and brighter weather of the last few days has brought an awareness of lighter mornings and longer days, a progression that has not gone unnoticed by both plants and birdlife in the garden either. Everywhere you look there are signs of new life, from the wood anemones pushing their tightly curled leaves above the woodland floor to the magnolia buds swelling almost visibly – every ramble shows a new attraction, or so it seems. The 500 Tête-à-Tête I planted in the autumn are pushing up under the apple trees and less apparently through the grass beside the stream – no hint of yellow daffodil anywhere in the garden yet, but I did spy a handful of tiny spikes of purple near the stream, the remnants of some crocus disturbed by the reworking of that area. Reminder to self – I must plant more crocus. 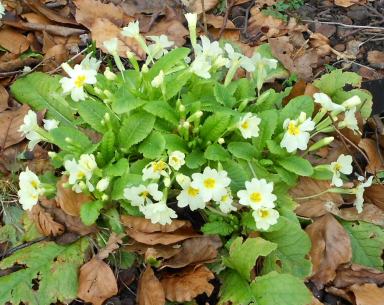 When I rambled through the woodland yesterday I noticed that there were some sizeable clumps of primroses in the woodland, with many tiny plantlets where they have obviously self-seeded in recent years, so I decided to divide some of the larger clumps and plant some primroses outside the kitchen window, under Hamamelis ‘Harry’, where there is a trough with running water (pumped), loved by the birds.

When I came to plant them up in their new location I realised how little soil there was above the pond liner to the right of the trough, limiting planting there, but I found a few crannies and shall add more soil to allow some more to be planted tomorrow. The birds like to splash in the trough so the area is fairly damp, and well-loved by the ferns and an Arum italicum ‘Marmoratum’, and the primroses should settle in well.

‘Harry’ is obviously happy here too, and glows in the early morning sun that shines down this side of the house. I have mentioned him many times on this blog, so was thrilled to have a comment recently from the ‘Harry’ that he was named after – Harry Van Trier, a renowned botanist who has written books about hostas, bamboos and hydrangeas. The witch hazel was named for him by Mrs Jelena De Belder, who gave her own name and that of her daughter Diana to two other beautiful witch hazels (both of which I have). The original ‘Harry’ is in Essen, Belgium and was visited last week by the real Harry who found it a ‘4 to 5 meters high plant, upright growing and with a rather narrow habit, but full of flowers’.

The unexpected joys of blogging….