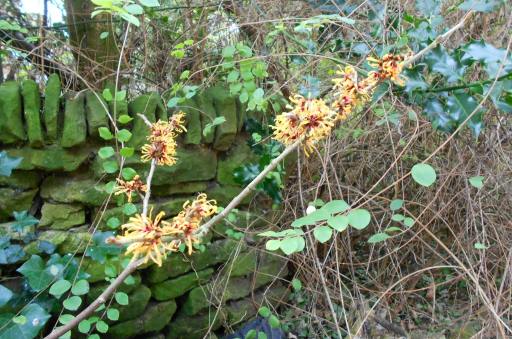 The Puzzle first. Why is it that when I post a completely wordless Wednesday I get the highest ever number of visits to the blog? I don’t write the blog for the kudos, but it is always intriguing to look at the statistics and see how many people have dropped by,  where they came from and if they have used any links – so what attracted them yesterday? Certainly not the text.

The ‘Pology is for posting another witch hazel picture – but I had to keep returning to the kitchen window this morning to admire my Harry, in full bloom with the sun shining behind it and adding to the golden  glow of the long shaggy petals. A distant memory suggested I may have posted a picture of Harry in the early days of my blog last year; instead I found a reference to it in my post on March 21st but also a picture of  Hamamelis japonica ‘Zuccariniana’, only recently in full flower then –  nearly 3 months later than this year! The unusual weather conditions may be contributing to unusual growing patterns – it was bright even if not actually sunny today, with temperatures above 14˚C at one point, and air pressure rising steadily all day. Nature seems to be aware of these changes, as bird activity had been very different in the last few days, very busy, and our chickens have suddenly started producing 2 eggs between the five of them instead of just one. Plants have put on a spurt – not just these witch hazels, but anything that had been showing a hint of bud or shoot – and there are dozens of clumps of bluebell shoots in the woodland. Bluebells – it’s January for Heaven’s sake!

Like Loading...
This entry was posted in Gardening, Gardens, Weather and tagged bluebells, witch hazel, Wordless Wednesday. Bookmark the permalink.

9 Responses to Puzzles and ‘Pologies